Every medical procedure supported by our practice has been put in place with the health and wellness of pets in mind and, based on this, we do not support the elective declawing (removal of normal digits) of any animal.

Current evidence does not support the use of elective declawing surgery as an alternative to relinquishment, abandonment, or euthanasia. This position statement aligns with the American Association of Feline Practitioners (AAFP) 2017 Declawing Position Statement and current bans in various US cities and municipalities.

Declawing includes surgical onychectomy, digital flexor tendonectomy, or phalangectomy. This includes surgical procedures performed with a laser. Banfield veterinarians should educate and encourage owners on alternatives to declaw. Surgical declaw is only performed when the following criterion is met:

Declawing is determined to be medically necessary as part of a comprehensive treatment plan to relieve pet pain or illness
If the above criterion is met and a medically necessary declawing procedure is to be performed, the providing medical team shall review the surgical procedure with the owner, including outlining all possible complications and post-operative care.

Banfield also requires that any surgical procedure be performed only with the medically appropriate use of anesthetics and analgesics and adherence to careful surgical and post-surgical protocols.

Veterinarians who declaw cats are committing animal cruelty. They should be prosecuted and then thrown in prison.
ANIMAL CRUELTY IS A FELONY.
DECLAWING IS ANIMAL CRUELTY. 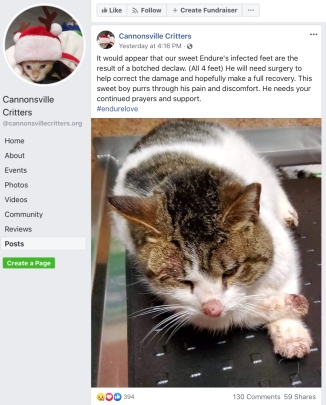 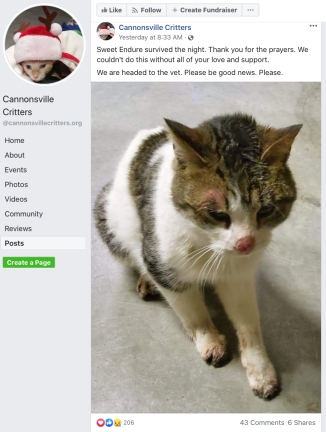 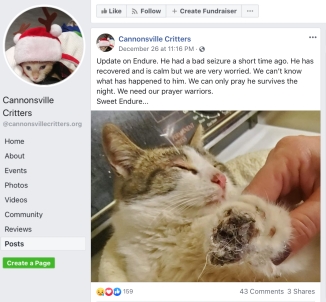 “Declawing keeps cats in homes and save lives.”
Yes, this is something we actually hear time and time again when the subject of declawing comes up.
Anyone in rescue can tell you just how inaccurate that statement is as we see the aftermath of declawing all the time. The ones who have been discarded outside because they began biting or eliminating outside the litterbox or the ones who get left at shelters with issues related to their declaw, thus making them harder to place or causing more financial burden for shelters who do the right thing by the cat and have their paws repaired.
One of our most recent examples is Spice, formerly Nala.
Spice was brought to Indianapolis Animal Care Services as a requested euthanasia because she was “sleeping a lot and going to the bathroom outside the litterbox”.
Spice happens to be all four declawed and since IACS is educated on the issues that declawed cats face, they did a paw evaluation for her which revealed that she has many fragments in her paws which is most likely the cause of her unwanted habits.
We have a weakness for helping declawed cats so we pulled Spice. Her repair is scheduled and we hope to see her lead a relatively normal and pain free life after.
As we watch Spice walk we can see that she limps quite dramatically and her paws don’t look like those of a normal cat. Despite the fact that she must be uncomfortable and most likely in pain, Spice is an absolute sweetheart and the fact that her life almost ended because someone made an unnecessary choice for her years ago is heartbreaking.
The reality is that Spice isn’t a rare case.
We see so many declawed cats who have developed issues related to their declaw and find themselves homeless or at risk of being euthanized either in a shelter or by their own owners.
The saddest thing is that there are many other cats who lose their lives because declawing still exists. It is not a procedure that serves any purpose to the cat (except in extremely rare medical cases), it is merely done due to lack of education or pure selfishness on the owner’s part.
There are so many alternatives to declawing and we’re always happy to help assist with nail trims or even nail cap application.
Declawing doesn’t save lives and it doesn’t keep cats in their homes.
#pawsneedclaws #pawproject 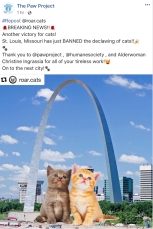 PAW PROJECT APPLAUDS ST. LOUIS ALDERWOMAN CHRISTINE INGRASSIA AND THE BOARD OF ALDERMEN FOR DECLAW BAN – St. Louis Anti-Declaw Law is First in Midwest and Tenth in US

The St. Louis, Missouri Board Bill 140, was passed on December 13, 2019 with a vote of 21-1 to ban declawing. The bill prohibits all elective, non-therapeutic declawing. The law is effective immediately. Declawing is already prohibited in nine US cities, in the state ow New York, and in 7 of the 10 Canadian provinces. Anti-declaw legislation is currently being considered in California, New Jersey, West Virginia, New Hampshire, Massachusetts, and Rhode Island. It is estimated that 23 million domestic cats (20-25% of all owed cats) are declawed in the United States, this highly invasive and painful surgery performed primarily to protect furniture.

“I am so honored to work with author of the bill, Alderwoman Christine Ingrassia. She is a true champions or animals. St. Louis now may consider itself the most humane city in the Midwest,” said Jennifer Conrad, DVM, a veterinarian and the founder/director of the Paw Project.

“St. Louis is proud to have taken an important step towards joining the multitude of cities and states moving to ban this archaic procedure,“ Alderwoman Ingrassia said. “The way we treat and care for our pets is indicative of the priorities we should set on behalf of all vulnerable populations in our community. I am very grateful for the Paw Project, the Humane Society of the United States, the City of St. Louis Health Department, and the Health and Human Services Committee of the Board of Aldermen. Their time and efforts have allowed this important legislation to move forward.”

Declawing is a surgical procedure in which the animal’s toes are amputated at the last joint. A portion of the bone, not just the nail, is removed. It would be similar to cutting off the first knuckle on the human hand. The Humane Society of The United States, the Humane Society Veterinary Medical Association, Alley Cat Allies, and veterinarians all over the world oppose the procedure. It is widely recognized that declawing cats does not make reduce the risk for humans with health issues. Recently published studies have shown that declawed cats are more likely to bite.

Amanda Good, state director of Humane Society of the United States – Missouri said, “We are excited to see St. Louis take this important step forward. This is an exciting day for animals in St. Louis and I hope more cities will soon follow.”

West Hollywood, California, in 2003, was the first city in the United States to ban the procedure, followed in 2009 by Berkeley, Beverly Hills, Burbank, Culver City, Los Angeles, San Francisco, Santa Monica, and Denver. St. Louis is now the tenth city in the US to ban declawing. The Paw Project worked closely with New York legislators to enact the nation’s first statewide anti-declaw legislation earlier this year . The practice of declawing any cat already is illegal or considered unethical in most of the world, including the UK, Ireland, Switzerland, Germany, Austria, Sweden, Australia, New Zealand, and Norway. Great Britain’s Royal College of Veterinary Surgeons has declared declawing to be “unnecessary mutilation.”

❌warning: graphic declaw photos. Why are this individual’s ears back? Pain. Warning: Graphic declaw pictures. He was declawed by a surgeon and it still went wrong. There’s no good way to declaw a cat! Please tag your vet clinic and share this information. Please. This has got to stop! #stopdeclawing#pawproject @ The Paw Project 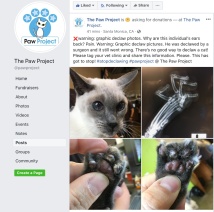 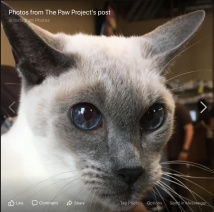 This is Alice and she is probably the sweetest, kindest, most loving cats we have right now. She honestly would never hurt anything in her life unless drool, purrs, and love bites somehow become deadly.

She’s amazing in every way so it’s shocking that at one point in her life someone chose to declaw her and not just her front paws, her back ones too.

Alice’s declaw presents an issue that’s different than the typical fragments we find in cats who have been declawed.
Take a look at her xrays, the arrows point to where her bone was cut too far back. This is something that we can’t fix with surgery and could have been avoided simply by allowing this sweet girl to keep her claws.

We don’t know if Alice feels any pain. She doesn’t present as though she is currently in pain and her vet thinks that she’s built up the calluses necessary to not feel severe pain from this mistake.
However, Alice will need to be monitored for signs of pain as she ages and possibly be given pain management in the future.

But for now she is another example of how declawing is an unnecessary procedure that’s only purpose is to serve humans (with the exception of extremely rare medical cases pertaining to the cat where declawing is necessary to save the cat’s life)
Alice didn’t deserve to lose her claws. No cat does.
#pawsneedclaws #pawproject

This is Cory and he is approximately 5 years old. He was found outside already front declawed and taken in by a good samaritan who fell in love with his sweet personality. Unfortunately he began urinating outside the litter box but this owner didn’t give up on him. He found his way to the Feline Medical Center in Houston to see Dr. Nicole Martell-Moran.

Xrays showed very large bone fragments and many nails regrowing crooked through the skin. Some were still trying to break through from beneath the skin. Thanks to the Paw Project he was able to be helped. Surgery was performed to remove the fragmented nail and bone and he is now on his way to recovery. We can’t give him back what he lost but can at least improve his quality of life moving forward. Please give some love and wish Cory luck.